Italy finally has a new government. But the new coalition's policy plans put it on a path to confrontation with the EU, as Italy feels it has been left in the lurch. The realization of these electoral promises could trigger a massive increase in Italy's budget deficit, as well as turbulence in the eurozone. European equities now come with higher risks attached.

Twelve years ago, Italy won the football World Cup, yet this time the country has not even made it to the final stages – a bad omen for this summer? After the two anti-establishment political parties – the Five Star Movement and the anti-immigration Lega - emerged as victors in the recent parliamentary elections, Italian President Mattarella called on this coalition of anti-EU parties to form a government, as all other options involving Italy's traditional political parties had failed.

But the initial list of ministers submitted by the two populist parties to the President for his (formally required) approval included the appointment of euro-sceptic Paolo Savona as Finance Minister. Europe's financial markets reacted negatively and criticism was fired from Brussels and Berlin, which prompted Mattarella to reject the proposed list of ministers. Fresh elections loomed, as the Lega and the Five Star Movement withdrew from the process of forming a government by way of protest. New surveys revealed that the two parties could end up winning almost 60% of the vote in any electoral rerun, rather than the combined 50.3% they had achieved in the March elections. In the Italian parliament, constitutional changes – such as a jettisoning of the euro, for example – require a 67% majority. Both Europe's equity markets and the euro then slumped as a reaction to the prospect of Italy’s anti-EU parties acquiring an even greater majority. President Mattarella therefore accepted a second proposal from these parties for an Italian government with the anti-EU Savona as Minister for the EU rather than Finance Minister. Markets responded more positively to this development, presumably because it appeared to be a lesser evil then the possibility of the anti-EU parties garnering 60% or more of the vote. 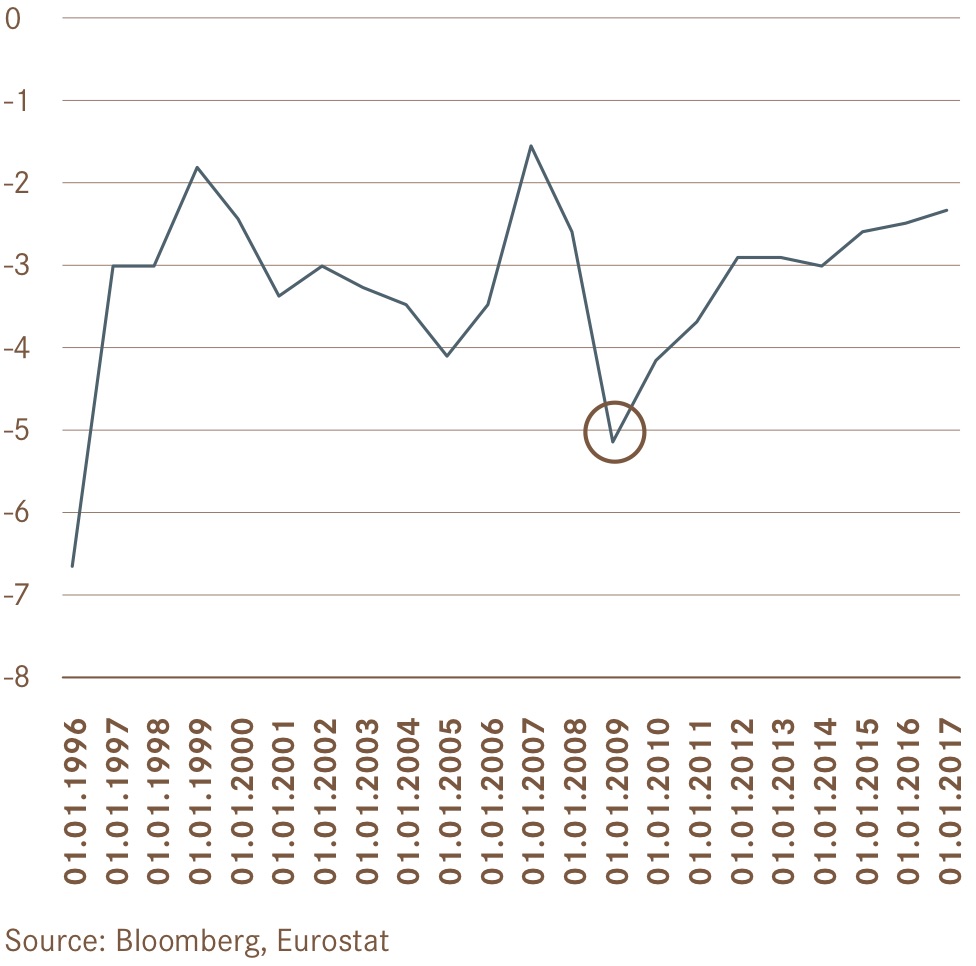 Just like the Trump Administration, Italy's new government is pursuing a policy that is focused on the national interest which will put it on a path to conflict with the EU. Plans include tax cuts for companies and private individuals, as well as a minimum income for Italians amounting to EUR 780 per month. What's more, the coalition intends to reverse Mario Monti’s pension reform of 2011, which increased the retirement age and therefore cut public spending. This coalition policy is popular in Italy, as is the call for other states of the EU to house a proportion of the 500,000 immigrants who have made their way to Italy. One of the reasons for the magnitude of this influx is the agreement concluded by Angela Merkel with Turkish President Erdogan to close the "Turkey route" to immigrants. Italy feels it has been left in the lurch by the EU.

Due to the high government debt burden (132% of gross domestic product), Italy must abide by the rules of the EU Stability Pact, which requires budget cuts. Indeed, this is why Mario Monti increased the retirement age (pension reform) during the euro crisis of 2011. But while reversing this reform is popular, both it and the other plans of Italy's new government will cost a great deal of money. Whereas tax cuts similar to the US could increase economic growth, they will initially increase Italy's budget deficit. This currently stands at 2.3%, which is a clear improvement on the figure of 5.3% recorded at the start of 2010 just before the euro crisis. However, if all the current government's plans were to be implemented, Italy's budget deficit would soar to around 6%, and national debt would hardly be sustainable.

A possible consequence of this development would be a downgrading of the credit rating of Italian government bonds by rating agencies, which in the event of Italy losing its investment grade rating would force institutional investors to reduce Italian bonds. This is the context in which the losses suffered by Italian government bonds should be viewed. As Italy's stock market index is heavily weighted towards financial stocks – like the Eurostoxx, but even more – which hold a significant proportion of government bonds, Italian and European equities suffer more than other regions at times of Italian turbulence. The Eurostoxx 50 has a financial-sector weighting of some 20%, or twice as much as the S&P 500 in the US. A positive scenario would see Italy defusing its immigration problem in the forthcoming negotiations with the rest of the EU in exchange for ongoing compliance with the fiscal rules of the EU Stability Pact. By contrast, a negative scenario would involve Italy pushing through its fiscal plans – from tax cuts to a reversal of the recent pension reform – and the prospect of rating downgrades, which could lead to a rise in the yields on Italian government bonds to 4-6% and new weakening of the euro. Whether the ECB would then lend a helping hand is far from certain, however. ECB purchases of government bonds via the ESM (European Stability Mechanism) or OMT (Outright Market transactions) presuppose compliance with a rigorous austerity programme. Let's hope things don’t get that far. For the next few months, Italy – and therefore indirectly also the eurozone and the euro – come with additional risks attached, which is why we prefer other regions.