Ilona Schmiel and Hans G. Syz-Witmer, Director and Vice President of the Tonhalle, on the regeneration of Zurich’s concert hall, the installation of cameras and overcoming people’s fears of coming in.

Ms Schmiel, Mr Syz, Zurich’s new Tonhalle is looking wonderful again after a four year construction phase. What music accompanied you during the inaugural phase?
Ilona Schmiel: Professionally, I was working intensively on Gustav Mahler’s 3rd symphony, which we performed at the opening concert with a full cast of 160 musicians on stage. A phenomenal work. As music is part of my daily work, I don’t listen to music all the time when I’m on my own: I sometimes need silence.
Hans G. Syz-Witmer: I also worked on Mahler’s 3rd symphony. I make it a habit now and then to consciously listen in advance to the works I’m going to hear at Tonhalle concerts, and to follow them with the scores. If I already have the work in my head, I hear much more detail at the concert itself. Following the differences in the interpretations is as exciting as any thriller.

What do you see as the appeal of the new Tonhalle Zurich?
Schmiel: In the hall, it is the colourfulness, the warmth of the space and the attention to detail with which it has been renovated. Of course, there are also the outstanding acoustics, which are better than before and will become even better with time. And when I leave the hall, I enjoy the view of Lake Zurich and the Alps, unobstructed by any walls.
Syz: In the face of major challenges, we managed – following intensive discussions – to restore the hall almost to its original condition, at the same time as equipping it with a new state-of-the-art organ. That’s simply fantastic.

What was the renovation’s biggest challenge?
Schmiel: We wanted to adapt the Tonhalle to the requirements of the 21st century. The coronavirus crisis sped up the digitisation process for us too and showed that the characteristics of a hall dating back to 1895 don’t always meet our needs. The big challenge was how to reconcile these needs.

The importance of music as a communal experience is enormous.

The Tonhalle is livestreaming more and more concerts. How important is that?
Syz: The importance of music as a communal experience is enormous. We all realised this when we were unable to enjoy live concerts during the lockdown. However, the digital concert hall is also a reality. These days, a concert hall must make its concerts available on various channels – live in the hall itself, as a livestream or on a time-delayed basis. I have resolved to do everything in my power to install cameras in order to promote livestreaming.
Schmiel: There were no plans for cameras originally. Due to the coronavirus, however, we have seen that we need to expand our online offering. While we already have four cameras that we were able to install after the renovation, we need more in order to ensure high quality livestreams.

What are you doing to attract a younger audience to the Tonhalle Zurich?
Schmiel: We have a huge music appreciation programme for everyone aged 4 to 99. I want all the 240,000 schoolchildren in the Canton of Zurich to come to see us at the Tonhalle at least once. Our musicians also go into schools and present themselves and the Tonhalle Zurich in an artistic way. Maintaining contact with students at the Zurich University of the Arts also remains important. And professionals from all artistic disciplines, including sound engineers and music producers, can also attend rehearsals at the Tonhalle Zurich.
Syz: The real skill will be to overcome their fear of coming in. The new Tonhalle Zurich should be for everyone. The days are gone when you had to go to a concert with formal clothes and a serious face. You can come to us however you feel comfortable, be this in a tie or not.

Why are the concerts getting shorter and intervals being abolished?
Syz: It’s like at the cinema: an interval interrupts the flow of the performance. Doing without intervals allows us to better maintain the audience’s concentration on the performance. There is also the fact that in the past, many people left before the final applause to get home in good time. During the encores, part of the audience was often already gone. This was a shame. With the new concept, encores are now also being revitalised. These are extremely important for the artists.
Schmiel: Concerts without intervals have gone well during the coronavirus pandemic. Instead of intervals, there are now opportunities to meet other audience members and talk to them, both before and after concerts. At least an hour before the concert there will be food and drink. The concert then forms the highlight, before there is later the opportunity to meet musicians in an informal atmosphere in the foyer. We need to do more to invigorate the venue. There is nothing more desolate than an empty concert foyer.

What changes are planned in terms of the programme?
Schmiel: It is a dream of mine that only the place and time of the concert will be announced, with the music programme itself being a surprise. The idea behind this is that the audience can rest assured that what we decide to include in the programme will be worth experiencing either way. What we offer is so important that it is worth coming.
Syz: However, for concert-goers who have a preference for certain composers, this could become critical. I, for example, tend not to go to the Tonhalle for Mozart.
Schmiel: ...but you could say that if Paavo Järvi interprets Mozart, then it is certainly worth rediscovering Mozart. It is all about total trust for me: what they offer at the Tonhalle is always so moving and touching that it is always worthwhile. But, as I said, this is my dream.

In recent years, the Tonhalle Orchestra Zurich has developed into a leading international ensemble. What goal are you pursuing with the orchestra?
Schmiel: While we are already world class, we want to make the leap to be in the top five internationally. This is the declared objective of the Music Director Paavo Järvi.

What will it take to achieve this?
Schmiel: It takes an immense level of will to deliver absolute top performances at all times.
Syz: And a Music Director such as Paavo Järvi, who enjoys an excellent international reputation and has an enormous impact with his charisma on both the orchestra and audience. On the one hand, he is an outstanding musician with a varied career: among other things, he was once a drummer in a metal band. On the other hand, he is an approachable and empathetic person with whom you enjoy having a glass of wine. 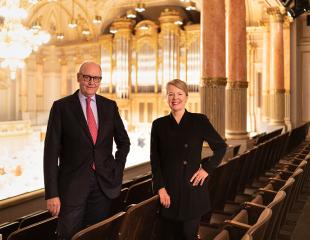 Ilona Schmiel has been Director of the Tonhalle Society Zurich AG since 2014.

Hans G. Syz is Chairman of the Board of Directors of Maerki Baumann & Co. AG and Vice President and Treasurer of the Tonhalle Society Zurich AG.

Learn more about the new Tonhalle in our current journal.

To the Journal
top