Commodities and inflation in upward trend

Commodities and inflation in upward trend

In late phases of the global economic cycle, production capacity is generally heavily utilized, which is why more resources are required – such as labour, but also commodities. Historically, this has often led to higher rates of inflation due to higher commodity prices. Higher import prices against a backdrop of the escalating trade conflict and US sanctions against Iran could have the effect of exacerbating increases in commodity price inflation. Investors can counter rising inflation and commodity prices with a commodities focus module.

Various indicators suggest that we are currently in a late – but not yet final – phase of the global economic cycle. These indicators include the development of yield curves, optimistic business surveys, and the very positive state of consumer sentiment in both the US and Europe. In phases like this, production capacity tends to be so heavily utilized that greater resources are required to satisfy increasing demand – in the form of both labour and commodities.

This is particularly the case when rising demand comes up against rather restricted supply, as is currently the case in both the US and German labour markets which are currently recording record low unemployment levels and with respect to certain commodities such as oil.

History shows that this leads to a rise in inflation via an increase in the prices of both commodities and labour, initially for producers, but then also for consumers and investors. It is possible that this phenomenon will be less pronounced this time around due to globalization and increased competition, but burgeoning protectionism and trade conflict are now undermining the globalization trend.

It is only reasonable to assume that a proportion of the price increases that result for companies, particularly rising energy prices and wage growth in the US, will now increasingly lead to higher inflation at the consumer price level. Over the next few months in particular, so-called base effects (lower basis of prior year for various components of inflation) should trigger a clear rise in inflation.

In addition, the new punitive tariffs imposed by the US should provide additional inflationary stimulus. If globalization is less able to exert its effect due to protectionism, inflation via more expensive imports could prove even higher, depending on how the tariff circle spirals over the next few months. Higher tariffs from China and the European Union as a response to the US special tariffs could then trigger an even greater rise in inflation.

The question for investors in this context is how the rise in inflation can be countered where investments are concerned. Historically speaking, commodities – rather like bonds – are liable to benefit from higher inflation, whereas equities are more dependent on earnings growth. Between 1976 and 2017 in quears of increasing U.S. interest rates commodities returned 14% p.a. on average, equities +11% and bonds +4%.

On the one hand, commodities are inflationary drivers in their own right – as we are currently seeing with energy prices, whose development is being driven above all by supply bottlenecks arising from the US sanctions against Iran – while, on the other, commodities are typically likely to end up at even higher levels in the medium term, as is typical of the late phase of the global economic cycle (as described above).

The CMCI Commodity Price Index has now broken its downward trend. The graphs below show the correlation between inflation in the US and Europe on the one hand and commodity prices on the other. re indirectly also the eurozone and the euro – come with additional risks attached, which is why we prefer other regions. 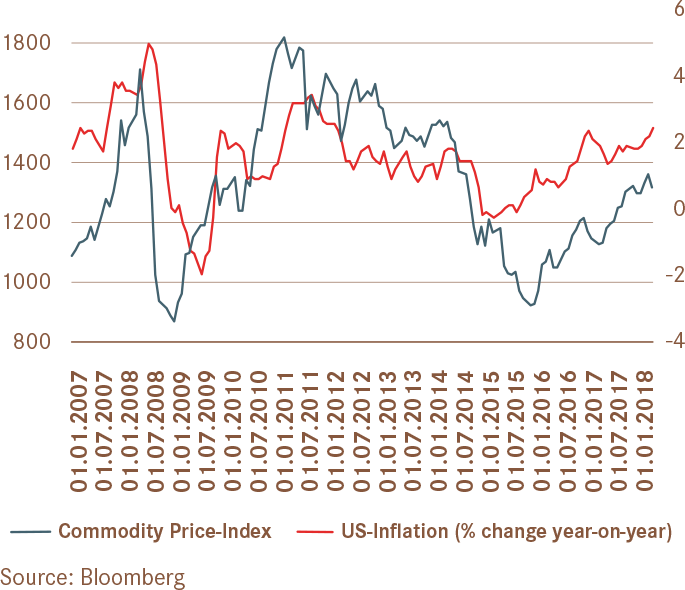 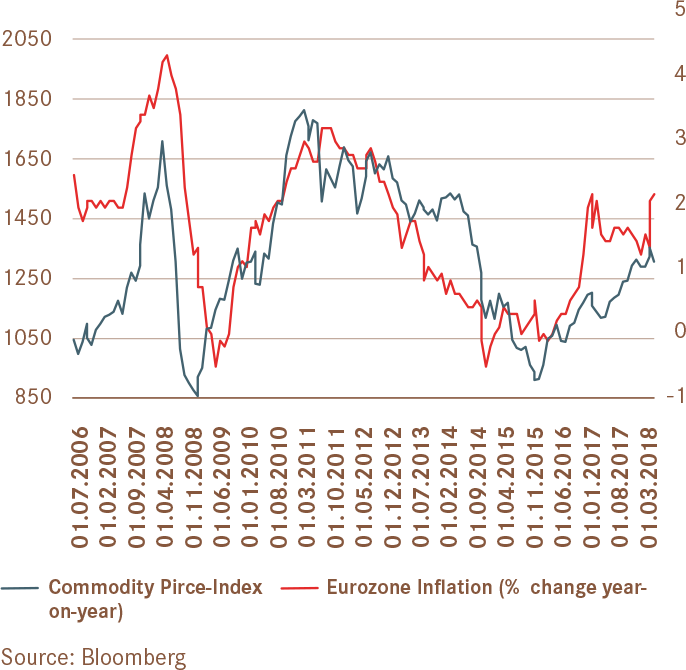